We chose to represent the theme by having strictly one button for all action in the game.  On top of that, all the player's movement is restrained to one dimension, and all entities go down in just one hit.

We hope you enjoy our little game!

Love the sound effects and the different enemy types! feels really satisfying to drive your sword into stuff!

Great idea for the game jam! Admittedly pretty frustrating, but it was still a solid concept with some fun levels. Couple things did bug me though.

First, the burst movement was difficult to gauge. This made it unclear if I was going to narrowly dodge a group of flames or just lunge to my death.

Second, adding a series of enemies before the boss felt a little annoying. I had to do a lot of strategic waiting when facing those enemies, which was frustrating when I really just wanted to see the finale.

That being said, the concept, enemy variety and overall level design made for a cool experience. If you plan on updating it, I'd gladly check it out!

The game is a lot of fun, but would have liked to see more polish, in some form of particles when an enemy dies, but either from that the game is really fun. It's very simple which helps add to the fun aspect of the game. Very crisp controls helps very much as well.

Thanks for the feedback :)

More polish on things like that is definitely something we would have liked to put in but ç'est la gamejam.  Glad you enjoyed it!

Holy crap.. well I beat it in about 20 very frustrating minutes. Those god damn fires pissed me off i had to cheese it by mashing the left click, and it would let me go forward while also blocking if i did it quick enough. It was all worth it for that sick boss battle at the end! Good music good game.

Thanks for the feedback, glad you had a good time!

We made some small polish tweaks to some of the levels this morning to hopefully stay on the fun side of frustrating :) 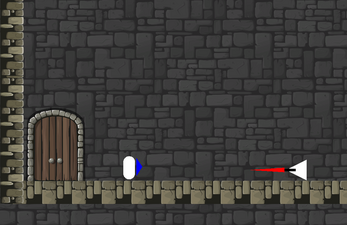